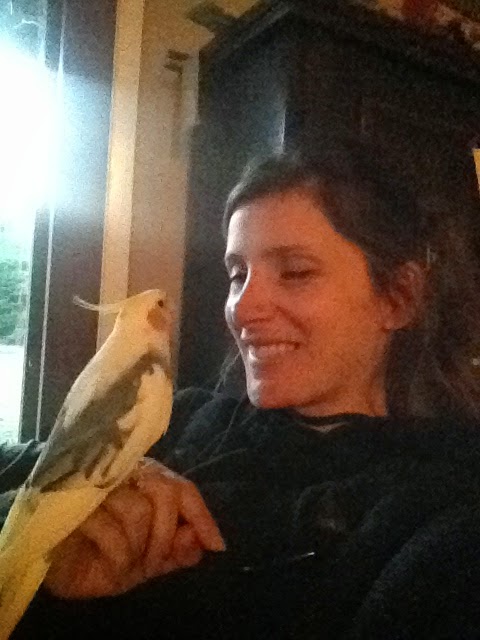 Back in 2013 I lost my beloved cat. My only pet for 16 years who has always been in perfect health, gets struck by cancer and in as little as a week, becomes a walking skeleton in pain with diabetes crashing her any chance of survival.

I was so devastated that I didn’t even have the courage and the strength to bring her myself to the vet for the put down. It is a hard thing to admit. My emotions couldn’t bear it. The idea of death was to me unbearable.

That night she passed away, I was hunted by her death. I googled everything about animals souls, life after death, proves of spirit and continuity, prof of the rainbow stories etc. I was SURE there was a rainbow cross and that this could not just be her end.

So all night, in my search, I stumbled on a video testimonial of Laura Stinchfield, an animal psychic who reasonably calls herself more an animal behaviourist. I was so moved by her testimonial and the signs and connections she got after her pets had died, that I thought there must be some part of truth in it. When you listen to some things, you just know deep down its true- and some stories cant be made up.

I’m a scientist, I have a Masters degree in Science after all, doubt and evidence seeking are my mains guardians against BS.  I wasn’t however 100% convinced about animal communication with deceased animals but one day a striking evidence came shake all my reality about communicating  with living animals.

The Discovery of Animal Communication via a Valuable Mentor

A friend of mine sent me the documentary: the animal communicator Anna Breytenbach. In this very popular documentary, a team of PHD scientists were following her to different places from less to more dangerous places around the world, to test her ‘talking with the animals’ claimed abilities. She knew nothing about the places she was taken to nor the animals she would talk to. The infos she gave to the scientists however, were typically about their previous owner, their current situation, complaints, their daily habits, their character, their problematic behaviors and conflicts with humans or other species, special requests and background. The infos provided by her were so accurate that scientists were blown away

I then started to develop an obsession with this women and started stalking Anna Breythencach everywhere. I wanted to learn from her. I wanted to know her “tricks”.

As an absolute animal lover, I wanted to help animals too. I wanted to have them tell me their stories, their struggles, communicate at distance with them, being able to locate them when lost, reassure them when scared, solve their confit with humans, help them escape hunters, escape slaughterhouses, help them living in harmony with human beings who simply and too often do not understand them, fear them (wild animals) or believe their level of intelligence or self-awareness is reduced therefore inferior to human beings.

Well, you will find out that not only animals are able to have the same feelings like us ( grief, depression, anxiety, attachment, usefulness,  loving and protection needs) but also have vivid memories, thinking processes, tics and irritations and even wishes and desires.

I literally bowed to her. She had no idea how much I have been stalking her…and I’m glad she did (silly face)

That week she was giving a workshop on AC. Cool, the opportunity of my life! She had brought a picture of a dog and we had to answer a few basic questions with some ‘connection techniques’. I sucked at every single questions. All was wrong apart from maybe one answer which was probably luck.

I will never be an AC I told myself, this is way too hard…wasn’t even close with my answers. Then other exercises followed,  working in pairs and this time using human telepathy like guessing what tool our practising partner is visualizing at the moment or what colour they are trying to send us through via telepathy.  I had a better success rate here about a 60 %. But my interest was in animals and I wanted to be able to receive accurate information from them, not from humans… I knew I had lots of work to do…

What is Animal Communication ?

Before I continue let me tell you what AC.  The term AC or telepathic communication are both synonyms for explaining that it is possible, using certain techniques close similar to hypnosis to receive a message telepathically  (transmission of a thought between 2 living beings) from animals that surround us, and this no matter the distance that separates them, nor the time when they deceased.

When we dream, our brain works on a certain frequencies (just like the herz-waves of the radio) which allows us to receive information in the shape of images, sounds or smells.

To communicate with animals, we are willingly going to ask our brain and heart to tune into this frequency and then learn to come in contact with the animal we wish to, by mastering a few validation questions first, before assuming we actually have a communication (and not a made-up interaction). This manner “to plug “ into the animal consciousness is also called telepathy. A number of scientific experiences proved today that telepathy exists and that this practice relies on the ability that a human brain has to develop this skill to connect mentally with another human being.

So we understand that this takes practice right? I started my practice immediately after I met Anna and committed every day to meditate.

Meditation is CRUCIAL part of developing telepathic skills. Why? Simply, because you must know the difference between what is your stuff (self- awareness of your own memories, projections, personal physical sensations and feelings and inner monologue) and what it actually sent to you from the outside.

The practice of Animal Communication

I challenged myself daily to communicate with the animals surrounding me and collect evidence of my progress. For example, I started with a neighbourhood cat. I had met him a few times already (Moustache) and one day I told him to show me exactly where he is next time I come by. So we had like a telepathic date set in advance.

I established a connection one day and I asked him to show me where he was at that moment. I received immediately vivid flashes in my mind, I saw him standing on the edge of a window, 1st floor, facing a large garden, behind a tall building, surrounded by  high bush and flowers.  A couple of minutes later I keep walking and I see him exactly where he showed me: same place and position like in my vision.  I was stunned.

After a few similar trials like that I thought it was time to get serious validation by owners and get to the next level with more challenging communications.

So I joined a practice group and worked on photos only. I love working on photos, I actually prefer it, information flow in much more easily. Typical questions were : who is he living with, other pets in the house, favourite toy and food, character etc. Then the owner would give feedback.

My first client is him:

Before I even started to ask him to connect with me, I had a massive flow of information coming in. Its like I had knew him before, but I hadn’t. I wrote over 2 pages about him to the owner, describing the other 2 cats he was living with, their character, his thoughts about each one of them, the type of apartment, the people, their faces, his favourite person etc. These are information that I couldn’t have possibly know just from a photo.

It was a very strong and overwhelming experience because looks like this dog LOVED to talk to literately ANYONE. That’s why intention in itself was sufficient. It usually doesn’t happen like this.

After a full year of hands on practice like that, all validated by owners, I decided to work on locating lost animals. Because THAT’S’ challenging. At least to me. And it requires slightly different techniques (at least for me) as I need to use both: animals here and now consciousness AND intuitive guidance. Why? Because an animal can rarely tell you the name of the street, give you google directions and locate himself, otherwise he’d have come back home already! So intuition and locating their own energy required developing your third eye.

I began initially to practice with animals who were not lost but I didn’t know their address, anything about them. I just practice locating where they live from picture connections.

I started with a lot of 10 pictures one evening and results were not so good. I was spot on for 4 of them and one almost, while the other 5 completely wrong. I kept a journal for each approach and noted what helped me most in getting right. I noticed that for 5 successful readings, each and every time I had spent a lot of time talking to the animal and getting to know them. The more I was able to download on them, the more chances I had to locate them rightly.  Logics, right?

So how do I do it? I use my hand like an energetic radar over a printed map and where I have the strongest pull, I stop and zoom in and scan again with me hands. Sometimes I see landscapes and map highlights, sometime I hear or see the name of a street; I write it all down….then with all these cues I do a google map search.  The more you practice, the better you get.

But its possible! If I can do it you can do it.

Anna Breythenbach is also one of these people who had to learn and wasn’t just born with a paranormal gift inaccessible to the ordinary people. She had to learn. The myth of the psychic guru is just a myth, really anyone can do it I guarantee you.

I had almost lost hope in the first year, I wasn’t able to HEAR anything. I knew I was understood because my requests were most of the time fulfilled – for example I asked a spider to come on its own into a small box…..TELL THE STORY….I also ask flies to leave or bees who enter the house without agitating a finger. Its almost instant. I don’t verbally tell them as such: I rather show them mentally the way out, and they do it just like I picture it for them…its truly amazing and exciting.

You should start today to practice and give yourself all the time (and Patience!) THAT you need. Don’t hold too much on the outcome, have no expectations or frustrations, just trust that your ability to ‘listen’ and open your sensory channels more and more each day as you practice.

p.s. Sharing a collection of my Art Inspired by Animal Communication & commissioned art for Clients.

You can order prints or different objects on Fine Art America or contact me directly for an order. 🙂 much love.